FACULTY OF MATERIALS SCIENCE AND CERAMICS

Professor Jan Chłopek has passed away 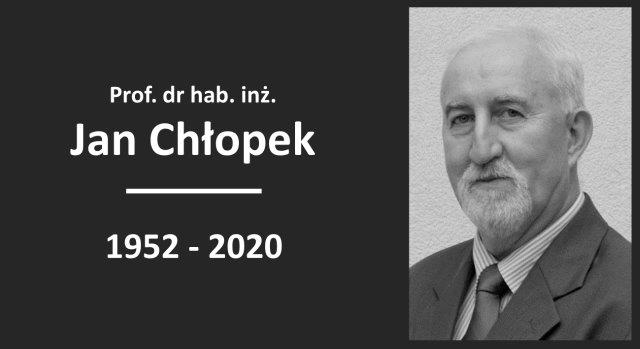 Professor Jan Chłopek passed away on Saturday, November 14, 2020. He was Head of Department of Biomaterials and Composites, former Dean of Faculty of Materials Science and Ceramics at AGH University of Science and Technology, former President of the Polish Society for Biomaterials, an academic lecturer, a scientist, but above all a wonderful human being, a leader and an extraordinary mentor of students and younger scientists.

For almost 50 years, Professor Jan Chłopek was associated with the Faculty of Materials Science and Ceramics at the AGH University of Science and Technology – first as a student and then as a faculty member. He graduated in materials science in 1976, received his PhD degree in technical sciences in 1983, habilitation in 1998, and finally became a full professor in 2005.

He was an outstanding scientist working on biomaterials engineering and composite technology. He was the author of over 350 publications, including 7 books/book chapters and 25 patents/patent applications. He was a supervisor of 9 PhD dissertations and over 200 Bachelor and Master students’ theses.

Prof. Jan Chłopek was Dean of the Faculty of Materials Science and Ceramics (2005-2012), Deputy Dean for International Cooperation (2002-2005), Head of the Department of Biomaterials and Composites (2012-2020). He was a founder member of the Polish Society for Biomaterials, where he served as Vice-President (1999-2006, 2010-2013) and President (2014-2016). Since 2007, he was Editor-in-Chief of the „Engineering of Biomaterials” journal. He was Chairman of the „Biomaterials in Medicine and Veterinary Medicine” conferences, organized annually since 1991. Having gained international recognition as a biomaterial scientist, Professor Chłopek chaired organizing committees of such important scientific meetings as the 27th European Conference on Biomaterials (ESB 2015) and International Conference on Biomedical Polymers and Polymeric Biomaterials (ISBPPB 2018).Prof. Jan Chłopek managed a nationwide team which developed teaching standards for "Biomedical Engineering" in Poland. He was a co-founder of the Multidisciplinary School of Biomedical Engineering at AGH. He received many awards and distinctions for his scientific and teaching activities. As an accomplished figure in the field of biomaterials science and engineering, Professor Chłopek received the accolade of „Fellow, Biomaterials Science and Engineering” (FBSE) from the International Union of Societies for Biomaterials Science and Engineering (IUSBSE).

The sudden death of Professor Chłopek has left us all in deep remorse. He will be remembered as a scientist, mentor, husband, father, grandfather, football fan, player, and coach. We will always cherish his kindness, sense of humor, positive attitude, and faith in people.

Our sincere condolences go to the Family.

Department of Biomaterials and Composites